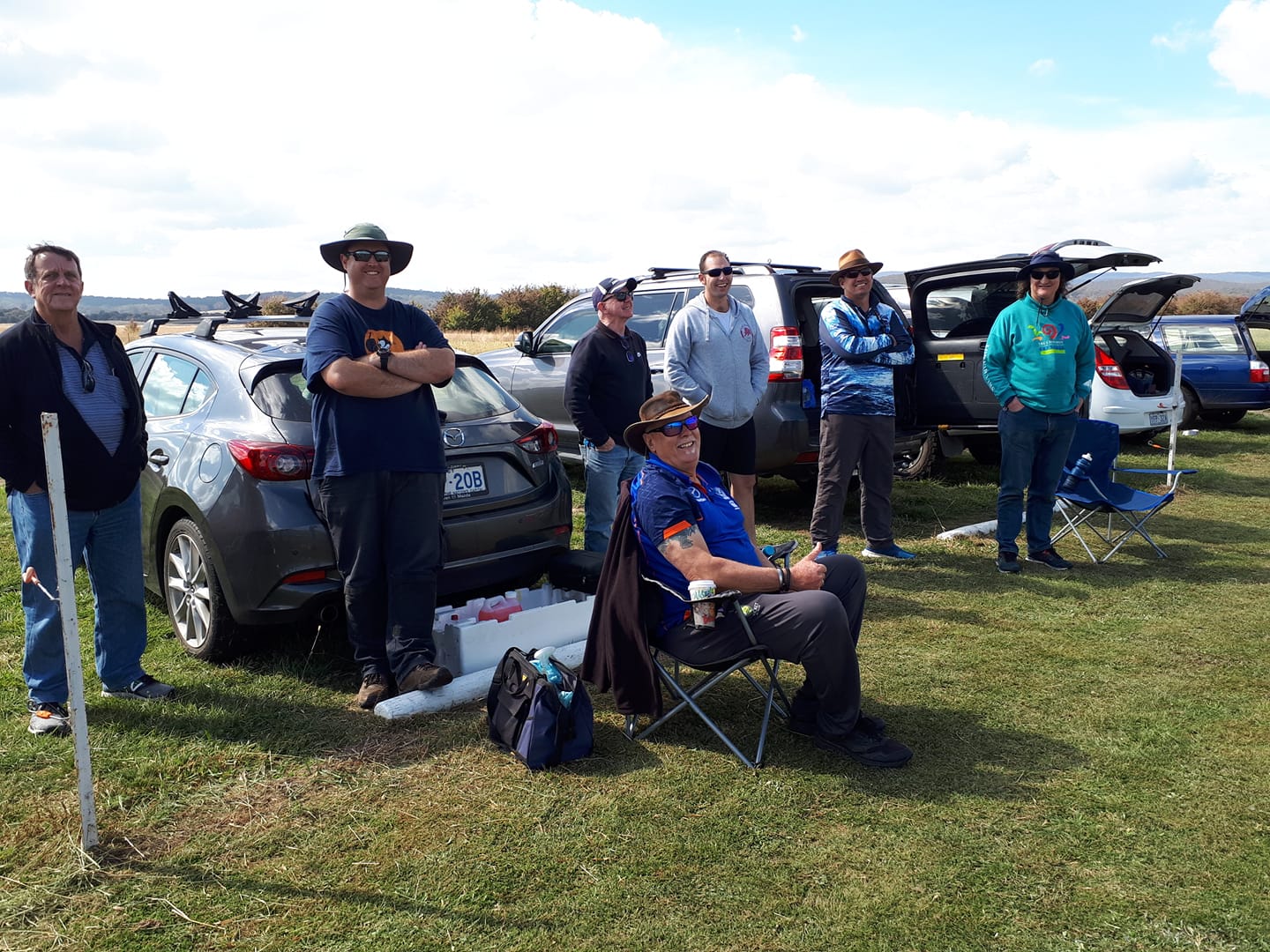 What A great weekend!

We had a large entry of 19 pilots including seven from the local region, three from Melbourne, one from Albury, and one from Newcastle and two from Shoalhaven, which is terrific to see, and the balance from Sydney clubs Our reason for visiting the regional clubs is to encourage participation and thanks to the support of the Committees and members of host clubs along with a few local personalities we are welcoming new pilots into our fraternity. The best result for our group has been the number of new or nearly new entrants that this particular event attracts from the greater Canberra area so thank you to those that joined in on the weekend.

We had five pilots .Tim Voight (Shoalhaven) in his second competition flying a Hangar 9 “Meridian” with electric power setup won the class by a good margin. Any readers in the South coast region of NSW should get along to SMAC and watch or talk to Tim. Alice Lloyd from BMAC (Belconnen ACT) flew very well to capture second position. Alice has now achieved three promotion points and will progress into the Advanced class, she is flying really well and was the highest scoring pilot out of four pilots from the Belconnen club to participate. Tim Merchant (Belconnen) flew in his first comp and scored consistently, one or two low scores stopped him from achieving a higher place. Andrew Bruce and Damien Sparkes were most welcome, Andrew at his second comp and Damien at his first. All the Belconnen pilots were flying glow powered “intermediate” type low wing aileron models and were “guided” by Phil Spence who stood behind each of them and “called” through each of their flights. Thank you,Phil!

Mario Schembri from Melbourne made the long trip with his BJ Park “Essence” powered by an Adverrun single prop reduction drive. Mario is a great guy, always has a bright outlook and gives his best effort, his flying was rewarded with a promotion point which was well deserved! Con Kyraikides from Rebel club in Newcastle proved to be the rebel yet again by trying to fly his YS powered Galactik 2 mtr model with only one main wheel. The hardest working bloke at the event was Jamey Bellicanta from the host Club Queanbeyan MAC. Jamey worked tirelessly for a few days before the comp and then night and day during the comp. The guy is unstoppable, this level of organising cost him in his flying results so we are sure he will return to his usual high standard at events where he is not so involved in the field.

Rod O’Neil recently relocated to the East Coast from out west and their loss is our gain! Rod flies at a couple of clubs in Sydney and does so extremely well. He flies a BJ Park “Element” with Plettenberg direct drive and he is well worth watching as this guy has talent. If you are near Camden Valley or SRCS at Gunderman look him up and ask for a demo. Richard Knox SMAC (Shoalhaven) flew a “Myra” biplane with Plettenberg direct drive into second place. Richard loves this design and is flying stronger all the time. Richard has been guiding Tim Voight in Sportsman and has renewed enthusiasm, his results are showing an improvement. Gavin Fitz-Henry (CVRCMSC) from Camden was a bit below his best. Recent limited opportunities for practice took a toll on his results. A bit more time at the practice field will soon return him to top form.

Phil Spence (QMAC /BMAC) won this group with his Adverrun contra powered “Alchemy”, considering his involvement with the pilots in the Sportsman class and all the associated distractions, he deserves the win. Kahl Eckersley (SRCS) had to withdraw at the end of the first day due to illness which was a shame as the top four guys in this class were running fairly close to each other. Artur Uzieblo from Melbourne flew very well even without a ‘caller”. His “Element” powering along nicely. Chris Henry (TCMAC) Albury and his Plettenberg powered “Alchemy” kept these two honest and despite a short trip in an ambulance on Saturday evening came back on Sunday firing on all cylinders, well done Chris!

This is the highest ranking class within Australian R/C aerobatics and we had three pilots attend this event. Shayne Lysaght from CKSMAC (Sydney) flying a “Sensation” biplane with V4 contra drive, Norm Morrish from P&DARCS (Melbourne) flying a “Skyleader” biplane powered by an Adverrun contra system and Jason Arnold also from CKSMAC flying a “Alchemy Pro” (monoplane) with Precision Aero Products belt drive reduction system. The biplanes and reduction drive systems are predominantly used in an effort to better control the speed of the aircraft in all attitudes so that the “presentation” or “artistic” image is the best that can be presented. If you live in Sydney and want to see this standard of flying come along to one of our competitions and watch or ask questions.

We had fantastic weather! Cool mornings, clear skies (too clear actually), a few hours of fog on the Sunday morning and light variable breezes. The field and facilities looked stunning. Thank you so much to the Committee and members at QMAC! Jamey and Phil did an outstanding job playing the hosts, organising dinner arrangements, ferrying diners to and from venues and overall making the weekend one of the best we have enjoyed this year. Special thanks to Chris Tindall for his weekend of computer work without flying. We were missing about six of our regular entrants so the field would have been too large (oh for a problem like that) if everyone had attended. The Sportsman class had a great time learning the subtleties of precision flying and now have some more points to master. To all the guys and girls who travelled long distances we thank you and hope to see you again sometime soon. The next events are at (SRCS) Gunderman and (Rebel) at Newcastle why not try and get along for a look and a chat?