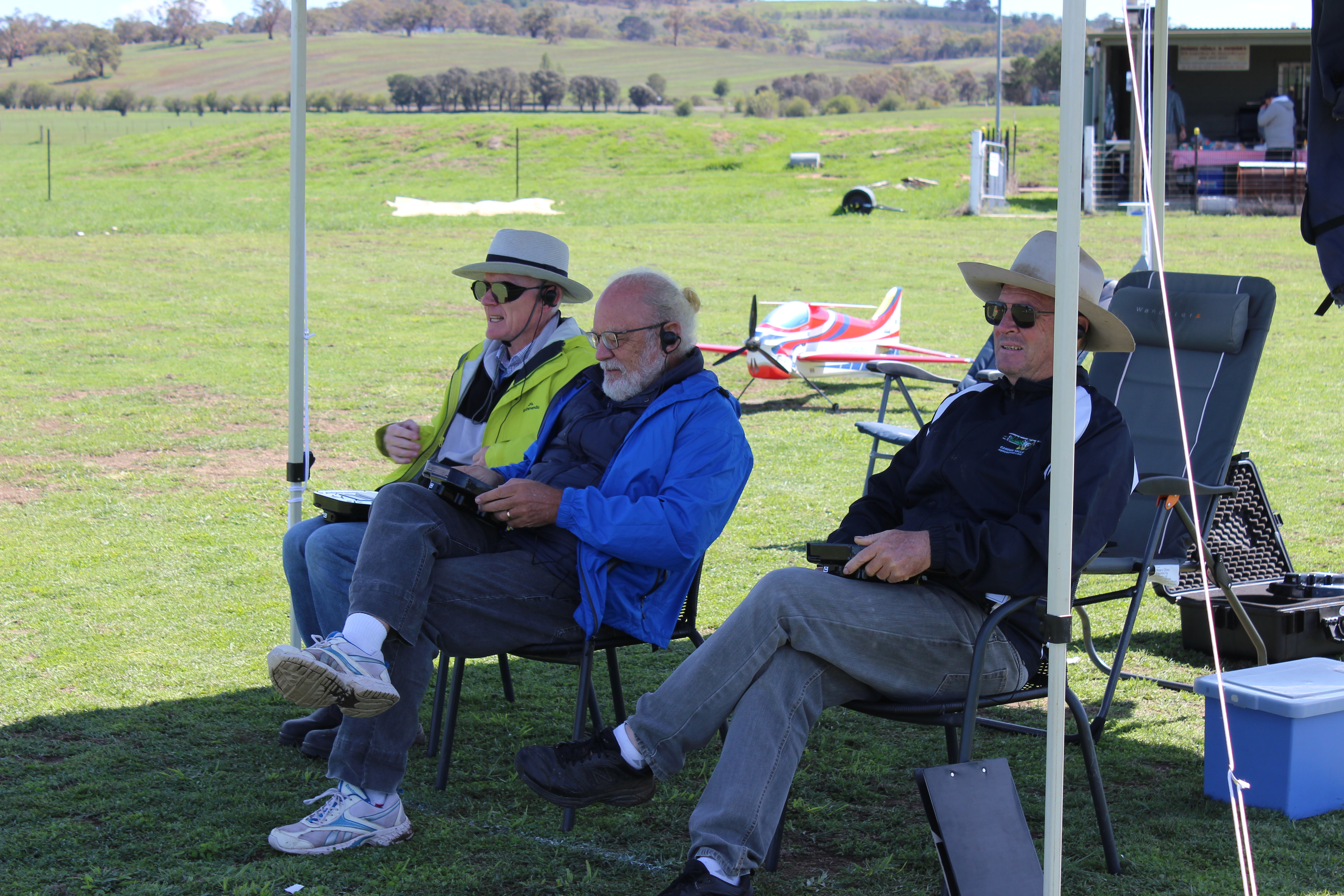 Amid all the concerns about the pandemic and mixed messages from the weather forecasters, we held our second competition for 2020.

After the bush fires and smoke in January, and the cancellation in February from too much rain, I suppose a perfect weekend was too much to hope for, but what started out as an impressive entry with 8 in F3A, 4 in Expert, and 6 (yes, no typo, 6) Sportsman entries, was blunted a bit by a combination of weather, illness, and a mid-air, to trim the list back to 11.

Yours truly arrived late on Friday afternoon, after an horrendous journey towing the van with a sick Falcon, and nearly running out of fuel. Some of the more timeous entrants had been able to get some practice in, thanks to QMAC.

After listening to the rain on the van all night, I dragged myself out to a chilly and sodden field, to join a bunch of masochists in the container, drinking tea and talking rubbish, while the rain came down, and we received the unwelcome news of the decision to cancel the APA Masters, due to concerns about the pandemic.

While the rain showed some signs of easing, the discussion about a start later on Saturday raised concerns about possible damage to the amazingly green QMAC runway, due to its muddy state. Taking this into account, and with a more promising forecast for Sunday, the decision was taken to call it for Saturday, and aim for an early start for a 1-dayer on Sunday.

With that, we all dispersed, some to call by the very interesting Scale Meet at CMAC, with some great examples of the builders’ art flying off their surfaced runway. Some interesting take=offs and landings were seen in the still blustery conditions.

Thanks to the hospitality of Phil Spence,  a group of us joined him at home for an enjoyable afternoon, before retiring to the Leagues Club for supper; a fairly early night for all, in anticipation of the early start on Sunday.

Sunday dawned clear, calm and chilly, and a surprisingly quick field setup saw us off to an early start for the 11 competitors, with the 3 Sportsman leading off in great conditions, followed by 3 in Expert, and 5 in F3A. Despite some small issues with the scoring system, flights followed quickly with an in blowing crosswind, which caused some problems, and 2 rounds were in the bag for all classes by lunch.

A short break was called, to do justice to the delicious Steak Sangas, before returning to the fray.

With no further scoring issues, flights ticked over quickly, with 4 rounds completed before 4pm.

David Green won in Sportsman, with Jamie Bellicanta in second, after losing his undercarriage on his first landing, and having to change to a backup model. Third place went to first timer Allan Lloyd. All 3 recorded promotion points, with some very tidy flying.

In Expert, Gavin was coming to terms with his new Arbalista, but still managed to fly his way into first place. Chris Tindall continued to improve, piloting the Tempest into second, followed by Felix in third.

In F3A, Kahl flew well to register his 2nd win in F3A, closely followed by Chris Henry, and Phil Spence, with Artur Uzieblo and Brian McGowan rounding out the class.

Once again our thanks to the QMAC members for their great efforts keeping us supplied with beverages and lunch. Hugely appreciated, guys.

And finally, a big shout out to Phil Spence for his efforts in encouraging QMAC members’ interest in Pattern: were it not for a run of bad luck, we could have fielded 7 entries in Sportsman.