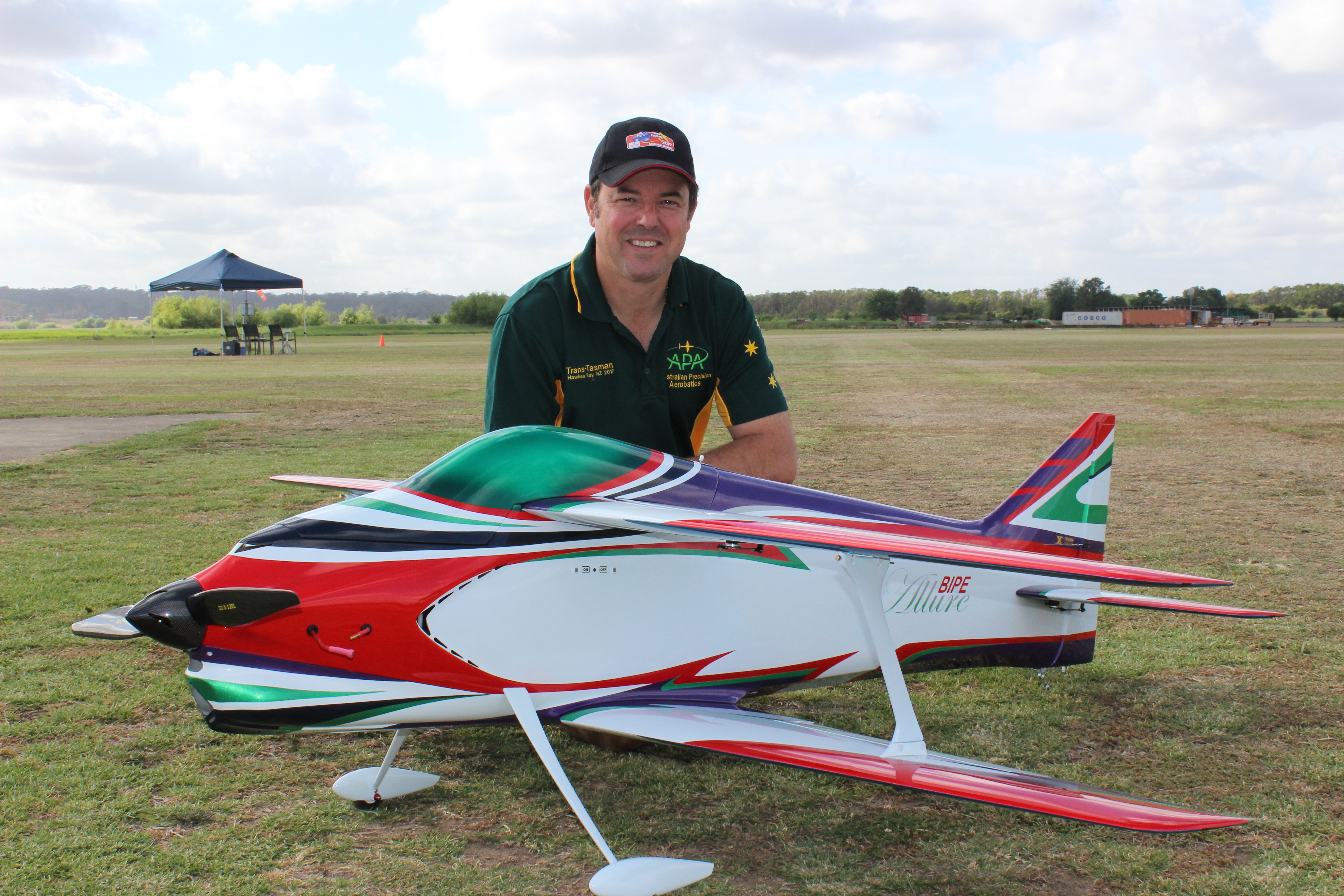 The NSW Pattern Flyers held this event on November 16 & 17 at the home field of Charles Kingsford Smith Model Aircraft Club at Pitt Town on the North-western outskirts of the Sydney metro area.

The host Club’s field was prepared to perfection but the threat of closure due to potential Total Fire Bans were making it difficult for entrants to finalise their travel and accommodation arrangements.

The weather and bushfire forecasts were showing a positive opportunity for the two days of the weekend and the location of the field amongst lush green turf farms gave us hope that we could hold the event and with luck, have no restrictions.

The Friday was classified a Total Fire Ban day by the Rural Fire Service and the host Club’s policy of “no flying” when TFB’s are in effect  caused a few entrants to reconsider their options which ultimately caused their withdrawal. The long distance entrants maintained their faith in the forecasts so we had travellers from Albury, Canberra and Newcastle make the effort.

The Saturday was much cooler than Friday, thanks to a cool change that moved over the area during the Friday night, conditions were great !

Flying got underway with the F3A International Class up first.

Jason Arnold was flying his recently completed Allure Biplane from the design board of Brian Hebert and only having two short flights before the weekend was still coming to grips with the different ‘feel” of the biplane compared to his previous monoplane .

Phil Spence (Canberra) and Chris Henry (Albury) both flew “Element”s from the BJ Craft/Andrew Jesky stable. Phil’s has a custom mixture of greens on a white base which he calls “Slime.” Chris’s was a more convention BJ Craft colour scheme. Both were direct drive electric powered.

Brian McGowan (Camden valley) flew his direct drive BJ Craft “Invitation” whilst I flew a Sebart “Wind” which was generously offered by Felix Nieuwenhuizen following the loss of my model the week before. What a legend he is! Thanks mate !

Kahl really set the pattern (no pun intended) for this class by flying smoothly and precisely.

Expert Class was next in the air.

Gavin Fitz-Henry and Felix Nieuwenhuizen (both from Camden Valley RCMAS) both flying a John Payne designed “Tempest” with direct drive, fought this one out. Gavin was scoring higher than his usual  scores and was flying very well.

The Advanced Class  consisted of Con Kyriakides from Newcastle (Rebel FC) once again campaigning his YS powered “Galactika” from Oxai/Paysant Le Rue and Alastair Bennetts (Sydney RCS) flying his newly completed “Bitsa”. Con had motor problems which resulted in his withdrawal from the competition but  did a sterling job of helping out by fulfilling his judging duties. (Thanks Con)!

The small field of pilots meant that we easily progressed through Saturday without any hurry or stress, we achieved four rounds for each of the pilots. The day had started with a reasonable amount of smoke haze and ended with a high level of cloud that really put a smile on Gavin Fitz-Henry’s face. He has been waiting all year for such conditions and flew exceptionally well, so much that he wanted to continue when the rest of us were ready to finish for the day.

The two “stand outs” of the day were Gavin and Kahl Eckersley, both these guys had their “acts together” and put together really nice flights which the judges and scores reflected.

Saturday night was “social” night (as usual) and most entrants had dinner and drinks at the oldest pub in Australia before heading off to their accommodation.

Sunday was definitely cooler, a few jackets came out of the cars until the sun warmed everyone, the wind was blowing “in” and was making the flights just a little testing.

We finished another two rounds  (six flights makes a full competition) Kahl and Gavin were still  the ones to study, however everyone was putting in good flights and scores.

The event finished up earlier than usual and there were smiles all around. Scores, places and promotion Points were all calculated by the trusty scoring system and then we had the presentation of Certificates. (Trophies)